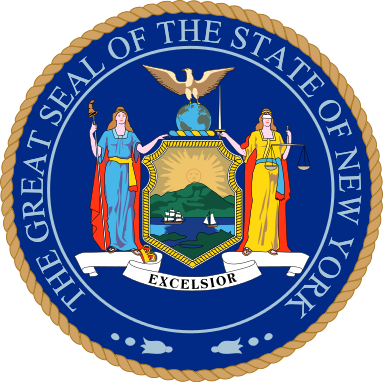 The New York State Department of Corrections and Community Supervision is in charge of the confinement and rehabilitation of incarcerated individuals in New York. It is responsible for approximately 32000 incarcerated people under custody housed at the 50 state facilities. Additionally, the Department oversees and supervises about 32000 parolees throughout seven regional offices in New York. The Department boasts of employing more than 28000 employees, including 18200 uniformed correctional officers. The New York Codes, Rules, and Regulations (title 7) compiles all the regulations regarding this Department.

The Department's mission lies in ensuring public safety by operating secure and safe facilities, preparing inmates for release, and then supervision for success after release.

Former Governor Andrew M. Cuomo in 2013 named Anthony J. Annucci as the Acting Commissioner of the Department. Before his naming, Annucci had served the Department as the Executive Deputy Commissioner since 2007. In this position, Annucci has taken a lead role in negotiating the stipulation of special housing unit interim with the New York Civil Liberties Union. Due to this stipulation, the state barred special housing units for disciplining pregnant or juvenile inmates. It established an alternative program for developmentally disabled inmates. Additionally, the stipulate created disciplinary guidelines for hearing corrections officers apply with all infractions.

If you want to search for any information regarding a loved one held at any correctional facility under this NYSDOCCS, visit the official website and click on the DOC offender locator tool on the menu. The Department's website has three different search tools: DOCCS Inmate Lookup, Parolee Lookup, and Parole Calendar.

To perform an Inmate Population Information Search, the site requires one to specify the offender's name alone or combined with their birth years, DIN, or NYSID. Typically, computerized information on this search is available 24 hours except for a 15-minute interval every night, normally between 11:45 pm and 12:00 am (EST). The outage is typically designated for necessary maintenance. Additionally, Inmate Lookup is usually unavailable due to server maintenance from Saturday 11:30 pm to Sunday 12:30 am.

This page aims to provide the general public with information regarding the status and location of incarcerated individuals in the custody of the New York State Department of Corrections and Community Supervision. Additionally, the Department provides information on formerly incarcerated people whose searches provide positive results on when and why they were released. Generally, search results include information items that were initially available by mail or telephone. The information returned upon a DOC inmate search is the most updated information available, extracted from the Department’s database and placed on the site upon request.

It is possible to perform a state prisoner search using the offender’s name. However, this search often gives long, cumbersome lists of current and formerly incarcerated individuals with similar names before you find the particular individual. There exist two ways of locating an offender by name. one can perform an offender search by entering the inmate’s exact last name with birth year. Knowledge of the offender’s age or year of birth can help narrow your search. However, using the birth year is based on the exact match with the inmate’s name. The search result shall include offenders whose last names are spelled exactly as entered and those born during or after the birth year filled.

The first and middle names are meant for the name list initial positioning for both name search criteria. After that, all offenders with matching full or partial last names return to the list regardless of their first or middle names. It is advisable to experiment by entering information in some or all search fields and a varying amount of data to achieve better state prisoner lookup results.

Using the DIN is the most direct way to perform an inmate search. The DOCCS assigns a DIN number to all incarcerated individuals in its custody. The Department utilizes the same DIN throughout the offender’s commitment terms regardless of where they are housed. Typically, a commitment term runs until the inmate completes prison time or is under community supervision. Suppose after that they are getting a new prison term; the Department assign them a new DIN.

If you do not have an offender’s DIN, you can use the name search criteria.

Criminal justice agencies only can use the New York State Identification (NYSID). However, if you know an inmate’s NYSID, you can use it to access their records. Keep in mind, NYSID information is not available on the Inmate Lookup search.

Offenders Listed in the Inmate Lookup

The Department's database comprises state prisoners confined since the 1970s. It, however, does not include youthful offenders, some previously incarcerated non-violent offenders under a special provision in the 2010's Correction Law §9, and offenders whose convictions have been set aside by the court.

Except for juvenile offenders, all convictions, sentences, and other data regarding inmates recently or formerly incarcerated with the Department is considered public information. This information is therefore accessible under the Freedom of Information Law.

The Correction Law §752 and Executive Law §296(15) forbid discrimination for license issuance or employment of an offender because of prior criminal convictions. However, the laws do not apply when there is a direct link between the previous offense and the particular employment or license sought. Additionally, discrimination is permitted if the employment or license issuance involves an unreasonable risk to property welfare or safety of the particular individual or the general public.

The Department does not maintain a list of the names of committed youthful offenders in its database. The latter is because the Criminal Procedure Law §720.35 protects the young offenders from the effects of a criminal record by making the records confidential. Typically, a youthful offender can be between the ages of 16 and 18 when committing the offense. According to the state laws, the longest prison time a youthful offender can receive is one year, four months to four years. Additionally, the law indicates that a youthful offender adjudication is not a conviction judgment for a crime or other offense.

Furthermore, according to the law, all official youthful offender records and papers remain confidential. The Department may not make them available to any person, public, or private agency apart from the facility to which the offender is committed.

The Parolee Lookup webpage aims to afford the general public, crime victims, state and federal criminal justice agencies, and law enforcement members the ability to access information regarding individuals currently or formerly under NYSDOCCS’s supervision. To perform a search in this offender locator, enter the following details:

Keep in mind that there are instances when the data regarding an offender is incomplete because of recent actions not reflected in the system yet. In this case, the Department advises you to contact the assigned Parole Officer or Senior Parole Officer for information regarding active cases.

The most direct way to locate a parolee is knowing their name, DIN number, or NYSID number. To fasten this process, one can access the DOCCS Lookup, which provides parole eligibility dates for indeterminately sentenced offenders. The Department routinely schedules incarcerated inmates to appear before the Board within two to four months of their parole eligibility.

Except for offenders subject to youthful offender adjudications, parolees under the Department’s jurisdiction are identified through this service. One cannot identify individuals under DOCCS due to a court order putting them on Strict and Intensive Supervision and Treatment, according to Article 10 of the New York Mental Hygiene Law through this service.

This webpage does not maintain the names and records of youthful offenders committed to the Department and interviewed by the Board for potential release to community supervision. Although the law indicates that youthful offenders must receive punishment for their misbehavior, it also protects them from long-term effects from a criminal record.

Crime victims may have a right to a Board hearing in connection with an offender’s possible release to community supervision.

The Department maintains a Parole Board Interview Calendar available online for the general public and interested parties. The site requires one to enter the month and the year and then proceed to view interviews.

While the Department makes a reasonable effort to make available information current, accurate, and complete, the Board of Parole does not guarantee the same. Additionally, all data is subject to change regularly, without notice. The webpage shall not display the Board of Parole decisions after the release interview and the decision’s entry into the database. Additionally, the Department does not post the decisions or make them public before notification of registered crime victims or their representatives.